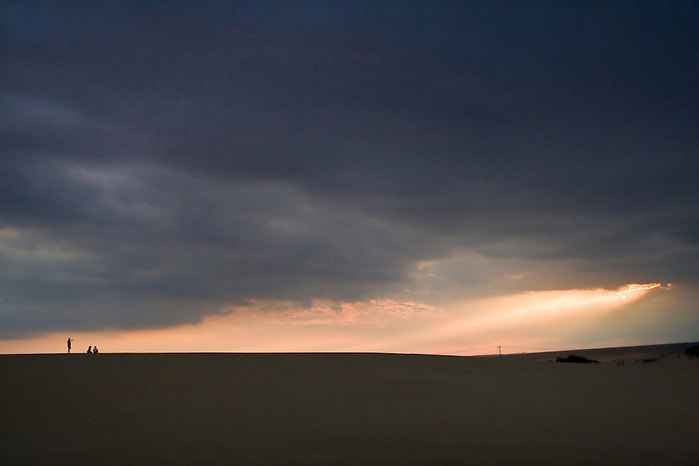 We thought it would be interesting to share some of the inspiration behind and interpretation of the “One Day” series. Taken in North Carolina’s Outerbanks, the series addresses the relationship between travel, the horizon line, and landscape.

Kathryn takes her inspiration primarily from travel. In this series that interest in travel pairs with the themes of line. The relationship between the horizon line and the picture plane is subverted to challenge the viewer’s understanding of both landscape and style.

Personally, the series characterizes our relationship to the land and environment. Kathryn uses the camera to shift our interpretation of the landscape. That ability to alter the land through the image mirrors the various ways man visually or physically changes his environment. The expansive sky dwarfs the human figure in this series. Kathryn manages to remind us that the landscape still has the power to alter us. 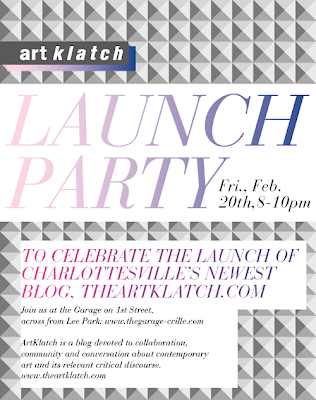 
Art Klatch is a collaborative blog that is interested in community, collaboration, and conversation about contemporary art and its related critical discourse. The blog contributors are Charlottesville-based artists, curators, and arts administrators who hope to engage in and expand the local art dialogue.

Join the Art Klatch community for drinks, cookies, and critical conversation about contemporary art in Charlottesville! We’re even planning to project the blog onto the side of the Garage. It’s going to be a night. Hope to see you there!

The Garage is located on 1st Street across from Lee Park. 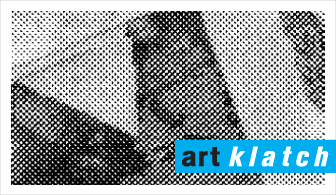 I’m thrilled to announce ArtKlatch, a C-ville arts collective blog featuring myself and other local creatives, has just launched! Please check it out at http://theartklatch.com/ and enjoy!

I think this will be a wonderful insight into an artist’s process and everyday. His website is here.

WHAT: “Shadow of the House — Photographer Abelardo Morell”
with Morell and filmmaker Allie Humenuk
WHEN: Feb. 9 at 7 p.m.
WHERE: Campbell Hall, room 153

January 27, 2009 — The University of Virginia Studio Art Department
will screen “Shadow of the House: Photographer Abelardo Morell,” on
Feb. 9 at 7 p.m. in Campbell Hall, room 153. The film follows Morell,
an internationally renowned photographer, over the course of seven
years and captures with deceptive simplicity and grace the daily life
of the working artist.
Filmmaker Allie Humenuk looks closely at the unique process of this
inventive Boston artist, whether he is photographing ordinary
household objects, glass sculptures constructed of light bulbs and
chemistry flasks, or making camera obscura photographs in which he
creates an ambiguous marriage of interior environment and outside
world.

Humenuk’s portrait of the artist reveals deep trust between subject
and filmmaker, as well as the creative inspiration she draws from
Morell’s vision.

Both Humenuk and Morell will attend the event, which is free and open
to the public.
Bo Smith, former director of film programs at Boston’s Museum of Fine
Arts and now executive director of the Denver Film Society, said,
“It’s one of the best films I’ve seen on an artist and the artistic
process.”

While the view of Morell’s body of work and artistic process is indeed
revelatory, the intimate look at his personal life is the heart of the
film. Though he now lives and teaches in Massachusetts, Morell was
born in Cuba, fleeing that country with his family as a child when his
father’s life was threatened by the Castro regime.
Forty years later, despite Morell’s deep personal doubts and parental
disapproval, Humenuk traveled with him back to Cuba, where he
reconnected with the extended family and the homeland he left behind.
Morell’s mixed feelings about nationhood, heritage and identity are
reflected in his own delayed U.S. citizenship ceremony, a heartfelt
event subtly captured in the film.