So this is part of a consolidated list of my resourceful resources. Colleagues, as well as aspiring photographers have all asked me in the past about where to go to learn more. And I feel that one of the best things about being a photographer is that there is always more to learn. So this series of posts will be my personal, curated resource of resourcefulness. If you benefit, feel free to pay it forward by linking back to the blog….

“Above all, it’s hard learning to live with vivid mental images of scenes I cared for and failed to photograph. It is the edgy existence within me of these unmade images that is the only assurance that the best photographs are yet to be made.“ – Sam Abell, Stay This Moment

So this is the beginning of a consolidated list of my resourceful resources. Friends and colleagues, as well as aspiring photographers have all asked me in the past about learning more. And I feel that one of the best things about being a photographer is that there is always more to learn. So this series of posts will be my personal, curated resource of resourcefulness. If you benefit, feel free to pay it forward by linking back to the blog….

I first heard  about Jason Morbier and Wise Elephant through Ms. Leslie Burns-Dell’Acqua’s buisness book Business Basics for the Successful Commercial Photographer. It was the end of the year and I felt as though my buisness could use a jump start with a fresh perspective on the rapidly changing market and new social media tools now available to creatives. Jason is great in his advice getting to the heart of the matter with the buisness very quickly, and was wonderful in suggesting how to best use tools such as Twitter and Facebook. I also found the team’s blog to be a great insight for today’s creative economy. Jason offers up great bits of info in his twitter feed, defiately a recommended follow.

The Image of the Week this week features photographs of Allen, a glass artist who resided on St. John. Back in 2006 I was invited to come to his studio and photograph him blowing glass. What a fascinating medium! Requiring much patience, skill and a steady hand my favorite part about it was the curious glasses we all had to wear to protect our eyes from the blinding flame of the kiln.

It took about an hour to an hour and a half to create the glass marble shown in the last shot. Though Allen has relocated back to the U.S. one can still catch a glass blowing demonstration at Maho Bay while on St. John. 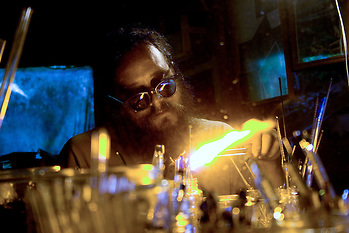 “Do you know what is the most valuable asset you possess? You need a lot to run your photo business, but what is most deserving of protection? Hint: Its not your camera gear. Nor your computer hardware and software– or even your image archive or your portfolio….”-Carolyn Potts (click for the full story)

“The capacity for delight is the gift of paying attention.”
Julia Margaret Cameron

So this is the beginning of a consolidated list of my resourceful resources. I feel that one of the best things about being a photographer is that there is always more to learn. So this series of posts will be my personal, curated resource of resourcefulness. Feel free to pay it forward by linking back to the blog….

One of my favorite and longest standing resources is Ms. Leslie Burns and her company Burns Auto Parts. She is awesome in lending resources to creatives on every level, and has a super-premium blog, podcast, free manuals and excellent books

out for creatives of all stripes.

A new twist that BAP has recently developed is the advent of monthly assignments. I participated in the first assignment and am excited and challenged by the second. This is a great resource for those looking for feedback on their images, and photographers who would like a theme to go with their personal shooting schedules.

I say that BAP is one of my favorite resources because Leslie is a real advocate for the professional creative, and has years of industry experience to back up her advice. I feel that her perspective has been useful for me from day one of my career and she continuously addresses timely issues facing professional creatives today.

and Tell the World You Don’t Suck: Modern Marketing for Commercial Photographers

. They have been recently updated to reflect the needs of the modern photographer, a must for any recent photo school graduate or anyone entering the profession:

Tasting Thomas Jefferson’s Historic Gumbo Recipe – Images by Kathryn Wagner
The photograph above of an herb bundle was made as part of a series detailing the testing of a historic gumbo recipe which was compared with the classic New Orleans version. Meticulously researched by David “Dr. Nac” Naccari, a visiting Barringer Research Fellow from the Big Easy, this was a fun and informative afternoon spent learning more about historical cuisine.

Interestingly Peter J. Hatch, Director Monticello Gardens and Grounds shares with us:
“Jefferson was a pioneer grower of “tomatas.” Beginning in 1809, he planted this grudgingly accepted vegetable yearly, usually in square X near the midpoint of the garden. Jefferson’s daughter, Martha, and daughters, Virginia and Septimia, left numerous recipes that involved tomatoes, including gumbo soups, cayenne-spiced tomato soup, green tomato pickles, tomato preserves, and tomato omelettes. Tomatoes were purchased in 1806 for Presidential dinners. Randolph’s The Virginia Housewife has seventeen recipes for tomatoes, including gazpacho, gumbo, and catsup. ”

For the comparison ingredients were gathered from the gardens at Monticello, and the produce were of the heirloom variety – so all of the herbs in the bundle above were a  close cousin to what Mr. Jefferson’s cook might have used. Originally called “Okra Soup” it was interesting to taste the more historic version was less spicy, yet more hearty, utilizing lots of rice and tomatoes. The modern, New Orleans version was what we most often think of when referencing gumbo – spicy, meaty and full flavored. Overall the comparison was enlightening to the intracacies of historic American cuisine

View the full photo essay over on my website.

Full recipe below featuring the historic ‘Okra Soup’, courtesy of the publisher and Google Books: 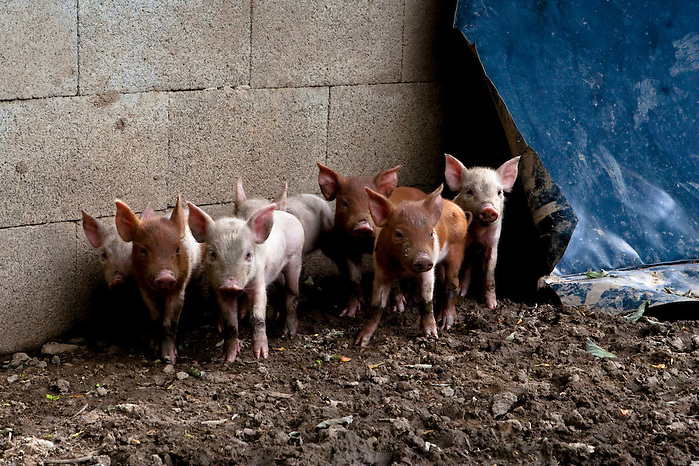 This is the first installment of a series I am calling ‘Behind the Shot’ that will illustrate and discuss images from my portfolio and outtakes. My hopes with this series are to bring a bit more insight into my shooting style and inform you as to my creative processes. To lighten the mood on a Friday I wanted to share with you Josephine‘s newest batch of pigs. As cute as these guys are, they didn’t make it into the latest photographic essay I have up on the website but I hope to put a smile on your face for the weekend ahead. Though these pigs are adorable, watch out for their mother…While in the pen photographing her babies the mother pig mistook one of my toes for a snack and tried to eat it! Luckily I got away just in time, and elected to use a longer lens to avoid Ms. piggy.