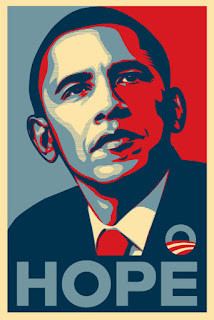 These two pieces of art have little in common visually, but when deconstructed to their meanings and influences are a perfect pair. Shepherd Fairey’s ubiquitous, now-iconic Obama graphic is an exercise in the reduction of elements and a subsequent increase in the arresting power of the work; so is Kathryn’s recontextualizing photograph of the Lone Sailor statue at Golden Gate Park. The precedents for Fairey’s work have been discussed at length – the maybe-plagiarized AP photograph, communist posters, Michael Anderson’s “Big Brother” from his 1956 version of 1984; from all of these influences he extracts the most powerful elements to create the image that we all know today. The expressive eyes, calm forehead, and concerned mouth are all expressed in a few loud punches of color – iconic and loaded ones at that.

Kathryn’s photograph is a similar exercise in minimalism. You see the statue from the back, so the expressiveness of the face is hidden from us, but his popped collar and hat detail his persona. The composition is off-kilter, showing no sense of place or weight, disorienting and confusing the viewer, who is thrown into a one-on-one audience with this now arresting and terrifying figure. The man in the corner seems to be commanding some kind of zealous tourist army; the stark colors and molded wind in the statue’s coat send chills of winter up the viewer’s spine. Just like Fairey’s Obama, Kathryn’s work is able to instill a strong emotion with readable historical reference points into the viewer’s mind with a sparing use of space.