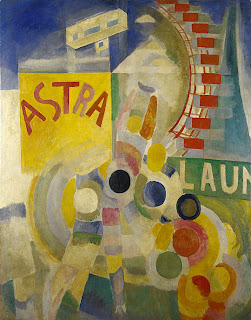 The motif of the Ferris wheel is a lyrical, evocative one for artists. There is a multiplicity of metaphors – childlike joy and wonder, the circular pattern, an expression of the machine age’s majesty – that the technology conveys by its placement in a composition. See Robert Delaunay’s 1912 The Cardiff Team, an early cubist painting based on different newspaper clippings. Delaunay often reduced objects to discs, and does so with his Ferris wheel; it is stairlike and blocky, more utilitarian than the carnival ride most are used to. The Ferris wheel is framed by deconstructed billboards a team of colorful rugby players, who lift their victorious center to catch a ball and seem to hoist him onto the object, onto its endless cycle of wonder. As Delaunay’s work quietly reproached and celebrated the commercialism of the seaside billboards, Kathryn’s pictures the hotels along a beach. This 2006 piece has the billboard framing the commercial oasis of hotels, with the Ferris wheel lording over the entire scene. Like a friendly giant the Ferris wheel seems to reclaim the ocean and nature for good; it’s almost turning counterclockwise, drawing the beachgoers into its playful insides. The entire piece is nostalgic without being specific, universal in its meaning by capturing a particularly interesting moment in this beach (and Ferris wheel)’s life.