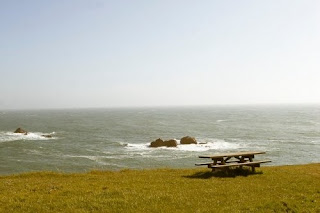 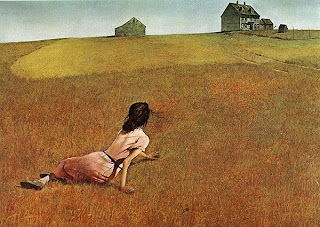 Andrew Wyeth’s 1948 Christina’s World, the image on the bottom, has become one of the defining images of American art, perhaps only second to Grant Wood’s American Gothic in its communication of American values and lifestyles to the viewer. Kathryn’s image from the “Journey” series is able to express a similar sense of Americana in just as sparse a composition. The tawny, shifting wheat of Wyeth’s piece is echoed in the swaying grass of Kathryn’s piece; compositionally, the ocean in Kathryn’s work is analagous to the circle of mowed field around the house. Just as Wyeth’s farmhouse places the scene in the American midwest and communicates all sorts of morals such an image conveys, the picnic table contextualizes Kathryn’s work. The lone figure is somewhat like the yearning figure of Christina; the table begs for families and couples to enjoy the sun on its planks as Christina struggles to crawl to her home. It’s a sense of melancholy lonliness, seperate from pity or depression, we feel in both pieces.